Time is running out to wear your political heart on your (short) sleeve and get something off (or on) your chest. Vote with your t-shirt. There’s no reason to limit yourself to Donald Trump or Hillary Clinton. Who’s on your dream ticket? 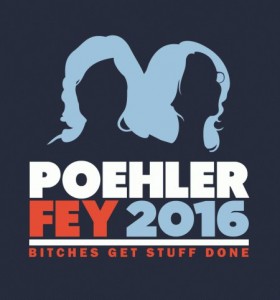 Don’t stay home. Get out and vote. Don’t know where your polling place is? Find it here. The rest of the time, vote with your t-shirt!

May the Fourth has been the unofficial holiday of Star Wars fans for years. DesignByHumans is celebrating this year with an excellent giveaway. Prizes include:

But hurry! Winners will be chosen on Wednesday, May 4th. While you’re there, check out a few of our favorite t-shirts.

You can never have enough Star Wars tees. Buy them you should! 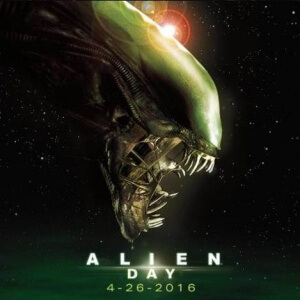 LV-426 is featured in the first two movies, Alien and Aliens. Alien³ and Alien: Resurrection take place elsewhere–and are reviled by many. Prequel Prometheus occurs on LV-223, another moon in the same star system.

Director Ridley Scott’s sequel to his prequel, Alien: Covenant, is scheduled for release October 6, 2017. It may or may not include a visit to LV-426 or LV-223.

Meanwhile, Neill Blomkamp has been working on an untitled sequel that will most likely ignore Alien³  and Alien: Resurrection and pick up where Aliens left off. There has been much rejoicing among fans. Unfortunately, Scott requested that the project be shelved until after Alien: Covenant opens.

Blomkamp has been teasing fans by sharing concept art since last year. In them, Hicks and Ripley are very much alive. He released this pic of Newt this morning in honor of Alien Day. 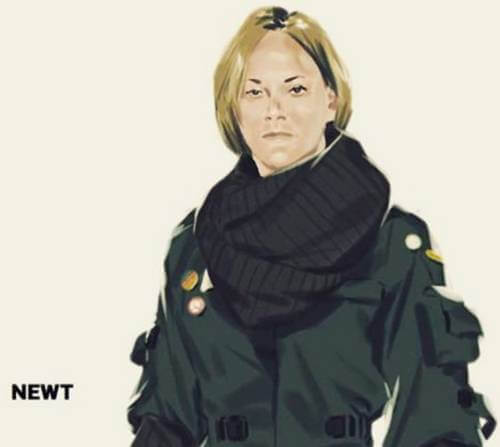 We really want to see both movies. October 2017 seems a lifetime away—more than a lifetime if you’ve just landed on LV-426. Why not show your allegiance by sporting a classic tee: 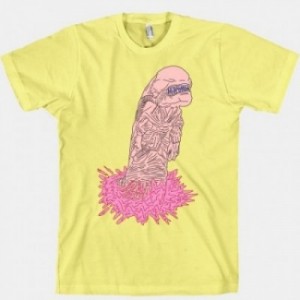 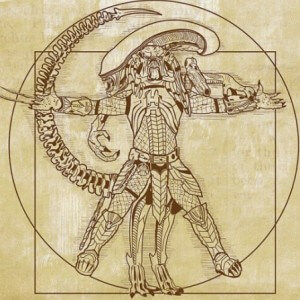 Scare your friends with this little guy:

Carry your gear in style with this: 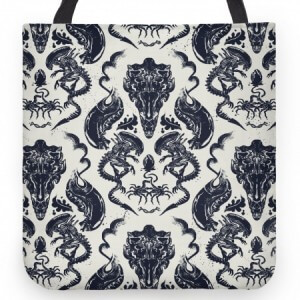 Check out one of our new favorites, available as a tee, hoodie, phone case, sticker or poster: 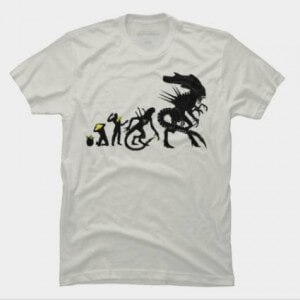 No matter how you choose to celebrate, we wish you a very happy (alien-free) Alien Day!

Everyone’s Irish on St. Patrick’s Day. But did you know “the luck of the Irish” used to be an insult? Edward T. O’Donnell, author of 1001 Things Everyone Should Know About Irish American History, explains on Irish Central:

“During the gold and silver rush years in the second half of the 19th century, a number of the most famous and successful miners were of Irish and Irish American birth. . . .Over time this association of the Irish with mining fortunes led to the expression ‘luck of the Irish.’ Of course, it carried with it a certain tone of derision, as if to say, only by sheer luck, as opposed to brains, could these fools succeed.”

We respond with this impromptu limerick:

Thank goodness, it doesn’t mean that anymore
So lift high your glass and exclaim with a roar:
“I won’t be done
until I see sun
So pour me another, dear barkeep, please pour!”

We know it’s not great, or even a good one—but when you get started it’s hard not to have fun. You could pen a winner before you have dinner, and please post it here when you’ve gotten it done.

Better yet, write it while wearing an awesome tee from Design By Humans. Here are a couple favorites: 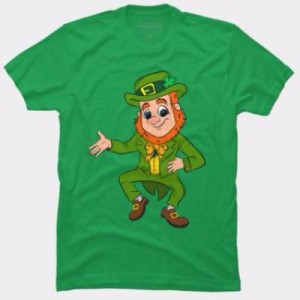 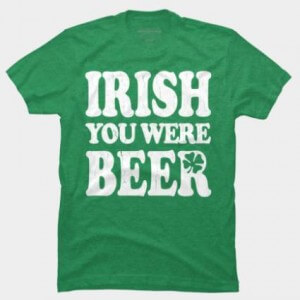 Be extra lucky when you order by March 17, 2016. Enter Coupon Code SPD15 at checkout to receive a 15% discount on apparel.

2/18/2016 Update: The theme of the March Collector’s Box is Cosmic
and will be available to pre-order on Sunday, the 21st.

Disappointed by the same old chocolate from your valentine? Impatient for Spring? Looking for original work by new artists? Surprise someone special—and who’s more special than you?— with the gift that keeps on giving: two exclusive tees and delivered to you each month.

It’s not often you can get to wear something and be sure no one else is wearing–unless you clue your friends in. That’s entirely up to you. Design By Humans is a leader in the t-shirt community. It attracts talented artists and showcases their work on t-shirts, posters, phone cases, stickers and other items.

You really should check it out. If you’re a first-timer, sign up for DBH’s newsletter and get 15% off your first order of just about anything except the Collector’s Box, of course. Good hunting!

If the only thing Valentine’s Day inspires in you is the desire to say, “Meh,” then we say, “Snap out of it!“ and fall in love with Design By Human’s Valentine’s Day sale.

If you don’t anticipate romance, you can at least look forward to spring and your right to bare arms. Here’s one of our favorites. 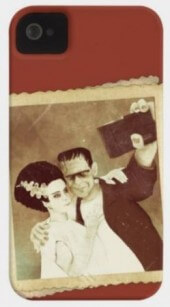 The bride and groom make a lovely couple, don’t they? If Frankenstein’s monsters can be happy, why shouldn’t you? Here are a few other designs guaranteed to start a conversation while simultaneously covering your torso. It’s multi-tasking writ large (or small, medium, extra large….) You get the picture. 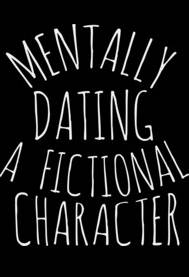 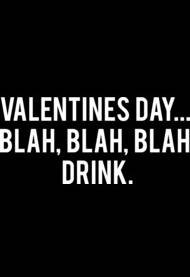 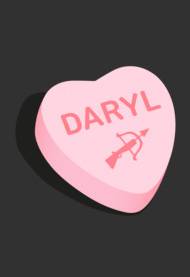 Like love, this sale is fleeting. On February 15, it will be a memory. A t-shirt will stay with you forever and never care if you forget to send flowers or introduce it to your mom.

October 22:
Yesterday was a big day: a new hoverboard was revealed and Michael J. Fox, star of the Back to the Future trilogy, received the first pair of Nike Air Mags with working power laces! Although the hoverboard will only work in a specially designed skate park, a limited edition of the sneakers will be auctioned off sometime in 2016, with the proceeds going to Fox’s Parkinson’s Foundation. 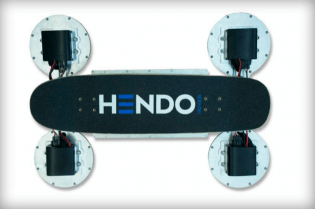 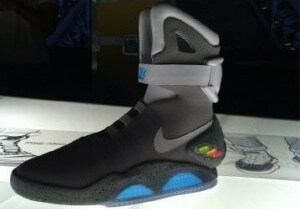 One especially outlandish plot point of the movies came (kinda) close to fruition. The Chicago Cubs made it to the playoffs this year, spurring speculation that they just might win the World Series as “predicted” in Back to the Future Part 2. New York Mets crushed that possibility last night by sweeping the first 4 games of an expected 7 game series, sending the Cubs home early and empty-handed.

But there’s no need to be glum or go shirtless today. Design By Humans  is following up its Future Day sale with FREE worldwide shipping of ALL apparel orders. You must enter code to qualify but hurry. The coupon expires October 27th, 2015.

Future Day, October 21, 2015:
destination of Marty McFly and Doc’s DeLorean
in Back to the Future

How will you celebrate Future Day? What could be better than a sale? (Note: you don’t have to wait until the 21st to take advantage of it.) Design By Humans has been showcasing the work of great graphic artists since 2007 and has an extensive Back to the Future themed collection available on t-shirts, hoodies, phone cases and more. Here’s one of my favorites: 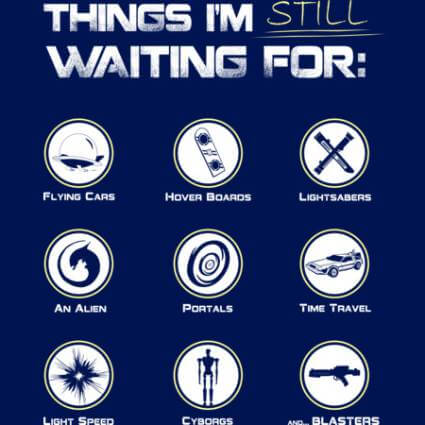 We can’t blame Doc Brown for the lack of hover boards (or lightsabers, for that matter). If Marty shows up, with the resurgence of all things 1980s, how will he know he’s in the future at all? We may never hear his answers to our pressing questions:

For now, we can pass the time by celebrating the Back to the Future saga with this special sale through DBH: . If you’re new to the site, sign up for DBH’s newsletter and receive a welcome gift of 20% off your first order.

But hurry. Future Day is almost past. Though I would never recommend exceeding the speed limit, I’ve heard that 88 mph and 1.21 gigawatts of power are recommended.

More info:
October 21 is Back to the Future Day

The artists at TeePublic are always coming up with great new t-shirt designs. I especially love their funny and inventive Star Wars tees. Right now, every t-shirt on the entire site is on sale for $14. But the sale ends in 24 hours…well, actually in 31 hours, 53 minutes. I don’t know why.

If you need an excuse to buy a new tee,  here it is. You don’t need a promo code or coupon; you just need to move with alacrity. It’s t-shirt season, people! Here’s one cool shirt I’ve got my eye on.

“Are these the droids you’re looking for?”

I hated Tom Brady before it was cool.